In today’s gospel, Jesus addresses two short parables to his disciples in the presence of the crowds. Parables were intended to tease their hearers, inviting them to see things from a new perspective, to see themselves in a new light. Jesus told these parables in early first century Palestine with its particular symbol system, while we hear them through the multiple layers of our own twenty-first century contexts and symbol systems.  “Salt” and “light” have slightly different resonances in different contexts, as do “earth” and “world”. Exploring those resonances or nuances can bring us to a deeper appreciation of the text.

This short reflection allows for a focus only on “the salt of the earth” parable or metaphor. For Jesus’ Palestinian audience, salt was used to preserve and to season food. It also functioned as a cleansing or purifying agent. It could only lose its savour if contaminated by additives. We can resonate with all of that. For some of the Jewish rabbis, salt signified wisdom: a “salted” disciple was a “wise” disciple. In some parts of the ancient world, as in Pakistan today, salt was used in dyeing processes as a way of intensifying as well as preserving the colour of fabrics. Many Westerners are not aware of this practice. These days we are rightly concerned about high levels of salinity in overworked soil. That was certainly not so for first-century Palestinians.

When we declare someone to be “salt of the earth”, we are generally referring to the sheer goodness of the person in question, her/his down to earth reliability, lack of pretentiousness and practical wisdom. To be salt of the earth is to season the earth community, to intensify its beauty, to be wise in one’s judgments, to be just and compassionate in all of one’s dealings. This parable, with its multi-layered symbolism, certainly teases the mind.

In the original Greek, the emphasis is on the first word in the sentence. Jesus is telling his hearers, disciples and crowds, that they are the salt of the earth. They do not have to become the salt of the earth; they are the salt of the earth. In short, he is affirming their worth. In its literary context, that assertion contrasts Jesus’ followers with those who might persecute them. It affirms their capacity to stand strong in the face of opposition, “for the sake of justice”. If they allow their commitment to be shaken, then the “salt” will be contaminated and the “earth” cannot be seasoned.  As we reflect on the diverse metaphorical applications of salt and earth, we might take a moment to give thanks to God for the gift of the material realities that underlie these powerful metaphors. This weekend, as I celebrate six decades of consecrated Mercy living, I give thanks for the wonders of our planetary home and for all who have shown me what it means to be salt of the earth and light of the world. 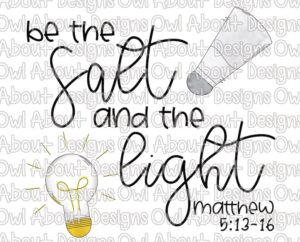