Most instances of enmity in our world are between near neighbours with differing cultures or slightly differing interpretations of reality. It is much easier to love those who are different from us if they are on the other side of the world. Jews and Samaritans shared a common origin story, but their respective histories led to a deeply conflictual relationship. While the Samaritans worshipped the God of Israel, they accepted only the first five books of the Bible as God’s word. They were despised by their southern neighbours. Jesus and his Galilean Jewish friends could hardly have expected a gracious welcome in Samaria. They may have been received more warmly had Jesus planned to stay and worship in the temple on Mt. Gerizim, the centre of Samaritan life and worship. The problem for the Samaritans is Jesus’ decision to use Samaritan territory simply as a staging post on his journey to Jerusalem, the heart of Jewish life and worship: the Samaritans “did not receive him because his face was set towards Jerusalem.”

James and John have an excessively violent reaction to the unwelcoming Samaritans: “Do you want us to command fire to come down from heaven and consume them?” The force of this question can easily be lost. James and John have heard Jesus telling them to love their enemies, to do good to those who hate them, bless those who curse them, and pray for those who mistreat them (Luke 6:27-28). And yet they want to call down fire on those who do not receive him. Jesus makes it clear that violence is not the way of God’s prophet, even in the face of rejection. He has no word of condemnation for the Samaritan villagers who failed to receive him. He simply turns and rebukes his two disciples and moves on to another village.

There is a sense of relentlessness in this passage. Jesus has “set his face to Jerusalem” and there is no turning back for him or for those who join him on the journey. In the company of his disciples, he now moves inexorably to Jerusalem where he will be “lifted up” in death and exaltation. Bringing the good news and establishing God’s reign of peace is the purpose of the journey. Jesus makes it clear that those who wish to follow him must live out in their lives the pattern of his life, a life of total commitment. While there is a degree of hyperbole in his insistence that the dead are to bury their own dead, it makes the point that there are no half measures in a gospel way of life. We are invited to enter into the journey with all its demands. There is no room on the journey for violence or for clinging to familiar securities when they conflict with the call of the gospel to deal with injustice. If we are serious about saving our planet, we must relinquish the certainties we have known and be prepared to “set our faces” towards whatever it takes to ensure God’s reign of peace in our common home. 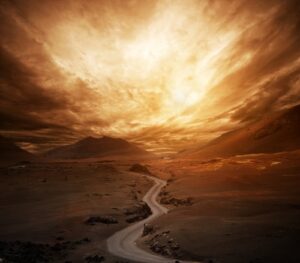