The gospel for today brings together elements that have traditionally formed part of Christian worship. In the first part of the story, Jesus welcomes those who follow him. He then speaks to them of God’s kin-dom and heals those in need of healing. In the second part, he takes the loaves, blesses them, breaks them and puts them before the disciples who distribute the bread to the assembled people. All eat and are satisfied.

The second part of the story is full of eucharistic symbolism. The setting is a “desert” place, recalling the wanderings of the Israelites in the desert of Sinai. The hunger of the people recalls God’s care of Israel in the wilderness. God feeds God’s people in the deserts of life, but only if those called to be disciples recognise their responsibility to be the hands of God. “Send them away” is one solution, clearly not the one preferred by Jesus. Rather, he says, “You give them something to eat”. They are said to number “five thousand men (andres)”. The women and children are simply not counted. When the people sit down in circles and share their food, they find there is more than enough for everyone. They gather up the broken pieces, just as we must remember to gather up the pieces that so often go to waste.

Jesus’ actions and words over the bread [and the fish] are echoed in the account of his final meal with the disciples: the bread broken and shared becomes his body broken and “given” for them. In the celebration of Eucharist, bread broken and wine poured out change their meaning. While all analogies fall short, we might begin to understand this mystery by thinking of the Eureka flag. The flag is constructed of fabric and thread, but it is no longer simply the sum of its material parts, precious as they are. The restored flag is housed in a special place and protected with the utmost care. Because of its associations with the Eureka rebellion and what that stands for in Australian history, it has taken on a meaning other than the goodness of the materiality of fabric and thread. In the celebration of Eucharist, the God-given gifts of bread and wine likewise become more than their material parts. They are life for us, the shared life of the Risen Christ. Eucharistic life is covenanted life. Recognition of another level of meaning does not discount the integrity and goodness of the underlying material reality, but rather affirms it.

Sharing in Eucharist means giving life for the sake of the many, sometimes to the point of heroism, sometimes simply by sharing our resources or our left-over pieces with others in need. Finally, it is important to remember that the healing is the prelude to the sharing of the bread. We are called to ensure there is a place at the table for those so often excluded from community by disability, ill-health or any kind of prejudice. 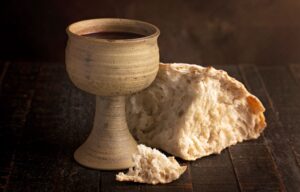