This week’s gospel reading continues the story of Jesus in the synagogue at Nazareth. Luke introduces here the theme of fulfillment of Scripture, a theme that pervades this gospel: Jesus’ ministry continues the work that God has done in Israel. At first, he is universally accepted: the people of Nazareth marvel at the gracious words he utters. They identify him as Joseph’s son. By the end of the story, however, these same people actually try to kill him. So, what happens in between to cause such a dramatic change of heart? These are religious people, not an unruly street mob. They are friends of the family. They are familiar with the sacred texts and traditions of Israel and presumably want to understand them more fully. In fact, they are like many of us who take time out on a weekly basis to come together for worship and prayer.

The people of Nazareth seem to be carrying a sense of exclusive entitlement to God’s favour, as well as some deeply entrenched prejudices against the neighbouring Syrians and Phoenicians. Their history is largely one of conflict with neighbours, of struggle for survival, and some are unwilling to relinquish their unhealed local and ethnic grievances. This story is about power and control. When Jesus suggests that God’s prophetic and healing power is accessible to and may even be more readily received among foreigners than within Israel, the anger of those who consider themselves “the chosen” knows no bounds: it spills over into violence. They have little patience with the implicit criticism of their attitudes to outsiders and the challenge of Jesus’ prophetic words.

One of the problems with the narrative is that Jesus seems to be deliberately provoking a negative reaction. There are other problems as well: there is no cliff in Nazareth from which the enraged crowd could cast him to his death, and it is highly unlikely that people of this tiny town of two to four hundred Galilean Jews would resort to murdering one of their own for what they see as a verbal assault. What is going on then? It would seem that the gospel writer is putting elements of later stories about the violent treatment of Jesus and his followers into this episode in order to foreshadow what is to come.

The story thus becomes a microcosm of the gospel as a whole. When the message is comforting, the messenger is well received. When it is less palatable, the messenger is in danger of being attacked or manipulated, more often than not at the hands of people who are basically good people like us. Unchecked assumptions, deep-seated biases, and uncontrolled emotions will function to bring the anointed prophet of the God of Israel to a violent death. This story invites us to check our assumptions and our biases lest we turn to physical, verbal, or emotional violence in the face of a prophetic challenge. 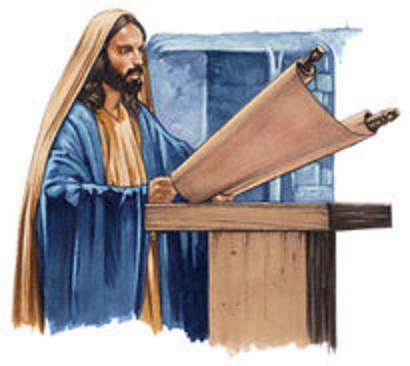