Some people seem to have an ingrained sense of entitlement. They put themselves first without regard to the sensitivities or rights of others. Whether their behaviour derives from childhood experiences of over-indulgence or from some other source, it can be quite divisive and even destructive of family or workplace or community. Those who put themselves first will often find themselves last in that they are tolerated rather than welcomed into most circles. They need to show the “good heart” that is hidden behind their façade of entitlement.

As Jesus moves from town to town on his way to Jerusalem, “someone” puts a question to him. The question is about salvation: “Are only the few saved?” Jesus treats this as a rhetorical question that presupposes an affirmative answer. His answer could be interpreted as affirmative, even if it is a far cry from the expected response. The questioner rightly assumes that God is the one who saves. Jesus responds with a reminder that God’s saving action cannot be taken for granted. One must “strive to enter the narrow door”. Serious commitment is involved in ensuring that God’s saving power is there for God’s world.

While the question comes from one person, Jesus’ response is “to them”. The insistence of people in the crowd that they have eaten with him may suggest they are among those who have been following him from Galilee. They may even be those who objected to Jesus’ table companions, the tax-collectors and sinners (Luke 7:34). The text makes it clear that they have heard his teaching: “You taught in our streets”.

Jesus’ reply indicates that the tables have turned. It would come as no surprise to a Jewish audience to hear Jesus stating that the kin-dom belongs to Israel’s ancestors and to all the prophets. Jesus’ assertion that it also belongs to those who come from far and wide, “from east and west and north and south”, might be less than palatable to those who see themselves as “first” in the schema of salvation.

Those who share in the banquet in God’s kin-dom, the “saved”, have prevailed in the struggle to enter through the “narrow door”. Entry is by no means restricted to Israel’s forebears. It belongs to all who hear the word of God and put it into practice. The inclusion or “salvation” of outsiders will cause grief among “evil-doers”. These flawed individuals include those who have eaten with Jesus and who have heard his teaching without effect and who, consequently, have failed to commit themselves to the struggle to establish God’s reign of justice and peace and reconciliation. There is no privileged access to salvation on the basis of birth or race or any other contingency. While the “door” to salvation may be “narrow”, the Lukan Jesus has already declared that it is open to all who hear the word of God, to those who “hold it fast in an honest and good heart, and bear fruit with patient endurance” (8:15). 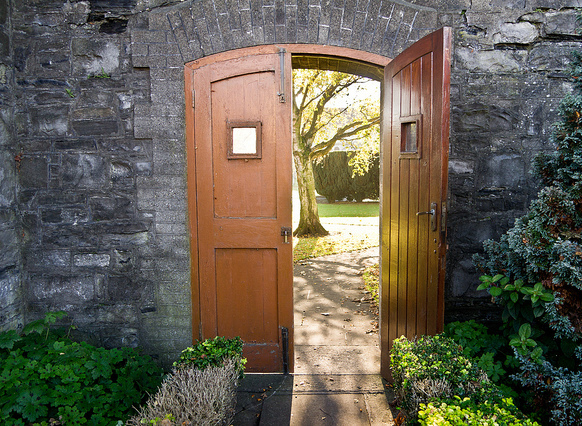