Jesus is addressed as “teacher”, and is asked to force a decision in an inheritance debate. He demonstrates that he is “teacher” rather than “divider”. He tells a hard-hitting story. He knows that story-telling is more effective in bringing people to life-giving decisions than is any attempt to bring down a definitive ruling, especially for those who surely know the law. His story is about a landowner who is blessed by an abundant harvest. The estate manager as well as the peasant workers and their families might reasonably expect a share in the profits, even a remission of the debts they inevitably carry. In this instance, the blessing of abundance turns the land-owner inwards rather than out towards others and so “toward God”. First person singular pronouns predominate: “What am I to do? I have no place…. I will do this…. I will… I will…. I will ….” The futility or senselessness of stockpiling for personal gain is highlighted by the shift to second person singular, “You fool…”, and by the divine judgment on the landowner’s self-focus and greed. Greed appears in today’s reading from the letter to the Colossians. Here, greed is simply idolatry, worship of a false god (Col 3:5).

In these times of planetary vulnerability, there is some urgency about the call to place our trust in the goodness of a generous God, to reduce our ecological footprint and to acknowledge that the good things of the earth belong to God and to all of God’s people, not just to the privileged few. In refusing to “store up treasure” for our own selfish ends, we become forever “rich toward God”.  This applies to nation-states as well as to individuals. We have some responsibility for what is done in our name, for the size and deployment of our foreign aid budget for instance. The command to “be on your guard, be ever vigilant” in this respect is a demand for gospel justice. 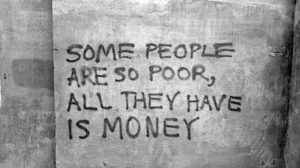