Pentecost Sunday is sometimes called the birthday of the Church. For the ancient Israelites, Pentecost (meaning “fiftieth”) was a harvest festival celebrated fifty days after the harvesting of the first sheaf. When the Jerusalem temple was built, this harvest festival was transformed into a pilgrimage feast to celebrate the covenant that Israel had made with God on Mt Sinai. The Jews of the first century, including Christian Jews, celebrated the great pilgrimage feast of Pentecost. Several decades after the death of Jesus, the early Christians reflected on their origins and chose this feast to mark the birth of God’s new covenant with God’s people.

In today’s first reading (Acts 2:1-11), Luke tells the new Pentecost story in symbolic language that evokes the story of Moses and the people of Israel receiving God’s Law on Mt. Sinai. Just as God’s presence to Israel was marked by earthquake and thunder and fire, so God’s Spirit enveloping the people of the new covenant appears in a mighty rush of wind and tongues of fire. Luke’s account also evokes early rabbinic teaching that the voice of God on Sinai divided into seventy tongues and all the nations received the Law in their own tongues. In other words, the dispersion and division created by the hubris of those who built the Tower of Babel is symbolically reversed with this outpouring of God’s Spirit.

For the content of the new covenant, we turn to the gospel reading from John 20:19-23. The risen Christ appears to the disciples huddled behind locked doors. He “shows them his hands and his side”. In other words, he provides incontrovertible evidence that he is the crucified one. He offers the simple greeting: “Peace be with you,” the greeting we offer each other at every Eucharistic celebration. The disciples respond with joy. He sends them on a mission of peace in continuity with his own God-inspired mission. He breathes on them the gift of the Holy Spirit and tells them that God will forgive those whom they forgive, and will “retain” or “seize hold of” the sins or transgressions of those whose sins or transgressions they “retain”.

To seize hold of evil-doing is to expose it and deal with it. Sometimes it is best to forgive and simply allow everyone to move on. In other situations, amnesty only exacerbates the problems. Much of the enduring conflict in our world derives from the inability of ordinary people and of leaders to know how to deal with transgression. The Holy Spirit is the unique source of our power to forgive, of our power to refrain from vengeance and of our capacity to deal with or “seize hold of” the sins of the perpetrators of violence in our world. Let us pray that the Spirit will guide us in the way of truth and give world leaders the courage to deal with the perpetrators of war and other evils in our world. We do our part by conscientiously holding our leaders to account. 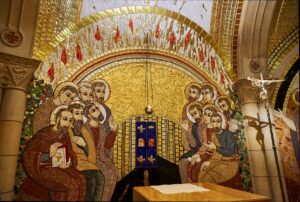