Whether the longer or shorter gospel reading is selected for today’s liturgy, the literary context deserves attention. Jesus is teaching the crowds in the Jerusalem Temple. He knows the vulnerability of many of the people around him and issues a warning about the grandiose behaviour of the Jerusalem scribes. The scribes were generally learned men on whom the people relied for rulings in matters of sacred law as well as for drawing up contracts and other important documents. They commanded the respect of many of the people. Jesus is not impressed by the behaviour of some of the scribes. He sees their pomposity as a mask for dishonesty and exploitation: they will receive the “greater condemnation”. They “devour the houses of widows” and hide behind the pretext of long prayers. Widows included women who had lost their husbands through death or divorce as well as single unmarried women. They were women alone without male protection in a patriarchal society and without the benefit of a social security system. They were dependent for survival upon the care of family and community. Jesus’ words of condemnation are strong words that will understandably provoke a reaction. It is no surprise that the Jerusalem scribes are among those who later conspire to kill him (Mark 14:1).

It is easy enough to be taken in by the posturing of those who present as superior and who look for status recognition. It is also easy to miss the generosity of those on the edge even if it is happening before our very eyes. The context presents Jesus as attuned to the plight of the widows. He now notices and draws the attention of his disciples to the action of one particular “destitute” widow. Her tiny contribution to the treasury of two copper coins for the upkeep of the Temple is far more significant than the big sums contributed by the wealthy, ostentatiously and out of their excess.

Is this woman being presented as the victim of an unjust system that extracts from her what she cannot afford, as some commentators insist? Is the Markan Jesus presenting her as a model of discipleship who offers “her whole living” despite the exploitation? Is she refusing to be a victim by making her own choice to contribute despite the unconscionable behaviour of the Temple authorities? We may not need to choose just one interpretation from among the many. Every powerful story allows for multiple interpretations. It is clear that this woman’s action provides a striking contrast to that of the scribes, like the action of another woman who, a little later in the story, breaks a precious jar and pours an abundance of healing ointment over the head of Jesus as he faces the prospect of death. As the gospel draws to a close, then, we find two stories of extravagantly generous unnamed women, stories told in memory of their gospel foolishness. 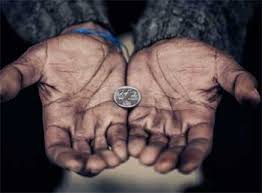