In this liturgical year, most of the gospel readings will be from the gospel of Matthew. As with any story, it is probably best to read Matthew’s story of Jesus from beginning to end over a few days, entering into the drama and attending to all the elements in the story. Sr. Elaine Wainwright’s eco-rhetorical commentary on Matthew’s gospel invites us to read with attention to habitat as well as to the human and the holy. We need to realise that what we bring to the text will inform our reading of the text. What we notice will depend on our own social and cultural contexts and on our capacity to bring our particular interpretive stance into dialogue with the worlds that inhabit the text. While the main character in the story is Jesus, there are other characters and character groups, including other-than-human characters.

In the passage selected for today, Matthew’s Jesus hears the news of John the Baptizer’s arrest and “withdraws” to the safety of Capernaum in Galilee. Matthew thus grounds him in a familiar locale. He then presents him as a great light for a people who have lived in darkness and the shadow of death and oppression. In the context of Roman imperial rule, Jesus offers the hope of an alternative reign. We might focus for a moment on the gift of light. Without an appreciation of natural light and of the sun as the main source of light on Earth, we cannot hope to understand this symbol.

Jesus invites his hearers to expand their horizons, for the all-embracing empire or kin-dom “of the heavens” has come near. He then calls four fishermen to follow him, to join him on his mission of proclaiming the empire or reign “of the heavens”. The verb “to follow” is an invitation to live out in their lives/in our lives the pattern of Jesus’ life. They “immediately” leave their boat and their father and follow him. Later in the story we find they still have their boat, an indication that, at some levels, the story is to be read symbolically. At times we need to distance ourselves from family expectations for the sake of the gospel. At times we have to decentre our material possessions even while we affirm the goodness of their materiality and their significance for the work of the mission.

One might get the impression that the alternative community that Jesus forms around him is all male. This impression is dispelled a few verses later when we learn that “great crowds followed him” (4:25). In Matthew 18, there is specific mention of children and, towards the end of the gospel, we find that women have “followed Jesus from Galilee, ministering to him’” (27:55). There is a far more extended group around Jesus than today’s reading might suggest. Women, men, and children, we are all invited to turn our lives around and to live out in our lives the pattern of Jesus’ life. 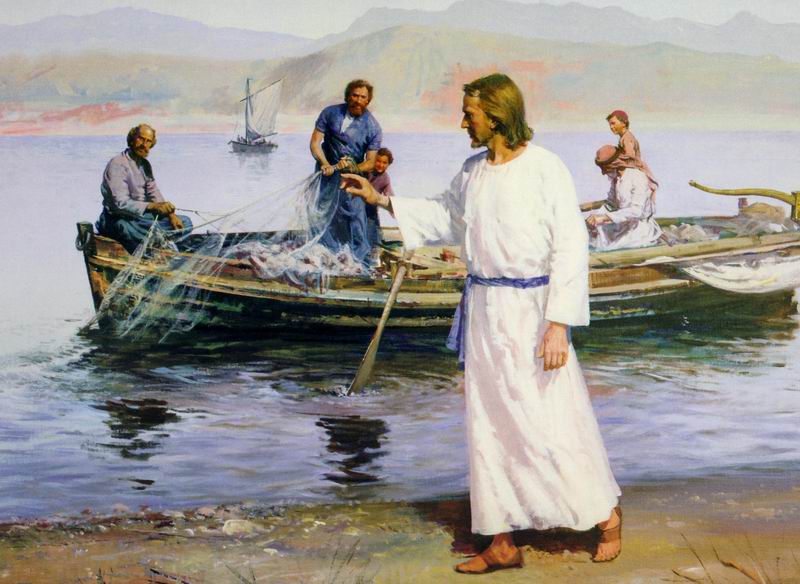