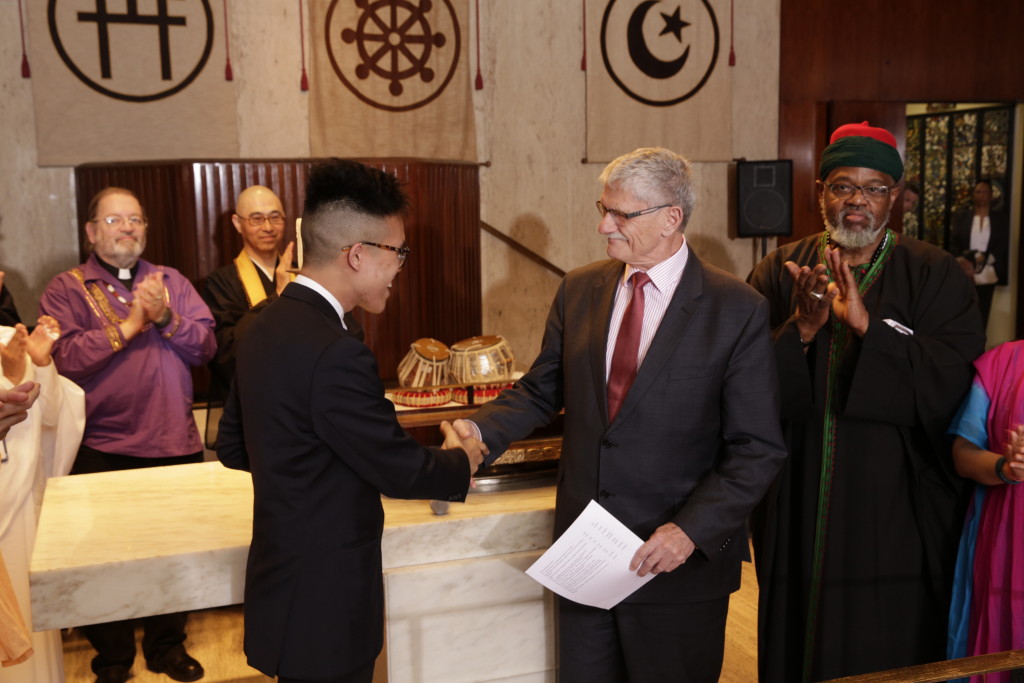 Catholic Earthcare Australia is proud to have joined with the world’s religious leaders to call on governments to take urgent action on climate change.

At a colourful multifaith ceremony, Ambassador Mogens Lykketoft, President of the UN General Assembly took delivery of the Interfaith Climate Change Statement to World Leaders signed by 270 high-level religious leaders, 4970 individuals and 176 religious groups from around the world.

Australian signatories – including the presidents of the Australian Hindu and Imams councils, the Federation of Australian Buddhist Councils and the National Council of Churches in Australia – joined Bishop Marcelo Sánchez Sorondo – Chancellor of the Pontifical Academies of Sciences and Social Sciences of the Holy See, the Dalai Lama, Archbishop Desmond Tutu, Pakistani grand imam Maulana Khabir Azad, Rev. Dr Olav Fykse Tveit – General Secretary of the World Council of Churches and more than 250 of their international counterparts to sign the Interfaith Climate Change Statement.

The interfaith statement says governments must urgently ratify the landmark Paris Climate Change Agreement and reduce emissions to stop global temperature rise. It urges the swift phase-out of fossil fuel subsidies and the acceleration of renewable energy investment to limit global temperature rise to no more than 1.5C above industrial levels.

“This and other religious initiatives demonstrate that climate change is now firmly accepted as a moral issue”, Mr. Lykketoft said. “The Statement shows how religions can be a catalyst for common action. You are telling your followers that you recognise the seriousness of climate change, its impacts on the vitality of the planet and the wellbeing of humanity. You are demanding action to be taken now.”

“Most of the action will have to come from individuals. The faith community is part of the broader Civil Society movement and plays an absolutely critical role in reaching out to followers to change their behaviour and demand smart policies. An initiative like this makes me confident that we can and will succeed.”

Catholic Earthcare Australia’s Philippa Rowland represented Australia at the handing over ceremony. “It’s deeply encouraging to see all faiths calling for urgent action on climate change, given clear signs from the science and the environment itself,” Mrs Rowland said.

“The current global coral bleaching event affecting the Great Barrier Reef is just one example of Australia’s vulnerability to global warming and the impacts are far worse for our Pacific neighbours.”

Tomas Insua, Founding Co-ordinator of the 300 member Global Catholic Climate Movement reported that a group travelling to the North Pole with a copy of the Pope´s Encyclical ´Laudato Si´ was being delayed by ice cracks, showing the severely threatened status of the Arctic Ice. “We are very concerned at the huge gap between nice words and actual actions from governments,” he noted. “This is a spiritual crisis. We call for climate justice towards all humanity and all species.”

A full list of the signatories to the Interfaith Climate Change Statement to World Leaders here: http://www.interfaithstatement2016.org/signatories

“Science and Christianity are on the same page in urging human responsibility in the face of escalating climate change. Christianity has always urged care for the created order. Science points to the urgency. The clock is ticking. We cannot sit on our hands any longer. The responsibility belongs to everyone: politicians, business leaders, the investment industry, faith leaders, and ordinary citizens. Politics has for a long time dragged its feet. It needs to catch up and realise that the age of fossil fuels is over – renewable energy must be mandated for economic as well as environmental reasons.”

President of the Federation of Buddhists Councils Australia

“The Buddha was born in the forest, awakened in a forest and passed away in a forest. He respected all forms of life and the sanctity of nature, and hence we should protect against the deforestation that is threatening to remove an important natural producer of oxygen and consumer of carbon dioxide. In addition to reducing the human carbon footprint, we should address human overpopulation and animal farming practices. The positive thing about this crisis is that it forces us to think of ourselves as one humanity. So let us work together out of kindness and respect for all beings.”

President of the Australian Religious Response to Climate Change

“In many places across this fragile planet of ours, global warming is no longer just a theory. It is destroying lives and livelihoods. The world desperately Australia to do its fair share of accelerating the shift to low-carbon technologies and of building resilience in vulnerable countries. The first step would be to ratify the Paris Agreement.”

General Secretary of the National Council of Churches in Australia

“Among all people there is a growing awareness of our need to care for our earth. All churches acknowledge that we can no longer simply look to the needs of the human family. The whole of creation is God’s gift. Increasingly, churches are recognising that we have a genuine mission to love and care for God’s creation  – this is an essential aspect of our Christian faith. As individuals and communities we can be challenged by the practical changes and implications of policy changes called for. Any lack of response condemns those who are among the most vulnerable in our world.”

His Holiness the Dalai Lama

“I am really happy to see leaders, governments and the civil society are now taking climate change and global warming seriously, and it is a hopeful sign. Taking care of this planet that is our only home is the responsibility of the whole of humanity, and therefore each of us as individuals has a responsibility to ensure that the world will be safe for future generations, for our grandchildren and great-grandchildren. I am hopeful that with a genuine sense of the oneness of humanity, all of us will do whatever we can to protect the environment.”

“We are heartened by the growing international concern about climate change and global warming. Pope Francis in his recent encyclical Laudato Si’ (on Care for our Common Home) invites – indeed urges – the entire global human family to see our planet and its peoples as our universal home. The protection of the atmosphere and the oceans are powerful examples of the need for political representatives and leaders of nations to take responsibility for the wellbeing of peoples beyond their own particular shores or borders. In some cases, entire regions and nations are under threat from the indisputable fact of rising sea levels.