Philippa Rowland joined the Red Lines Action at the Champs Elysees on the last day of the Paris Climate Summit.

Philippa Rowland, Catholic Earthcare’s SA Regional Leader, had the opportunity to travel to France at the end of 2015 for the Paris Climate Summit. She shares her thoughts about this experience and what the Paris Agreement truly means for the future of our planet.

We all prayed for the Paris Climate Talks to be a turning point, though it is clear the world is again at the beginning, not the end, of a vitally important journey. 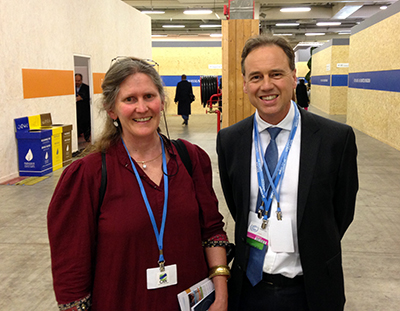 I was honoured to spend the full two weeks on the ground at Le Bourget in Paris. It was an overwhelming experience in many ways, but one that has left me with renewed hope and enthusiasm for taking urgent collaborative action on climate. The combined voice of faith groups resonated strongly throughout the fortnight. It was a moving privilege to hear firsthand from faith leaders so deeply involved in educating and inspiring the global community to accept the call for moral responsibility and compassionate generosity in developing shared principles.

The Paris Agreement is a significant step forward, the first time that 196 countries have agreed on the text for a legally binding agreement to replace the Kyoto Protocol in 2020. Importantly, it also sets an ambitious aspirational target of capping global warming at 1.5°C degrees.

Yet, amidst the celebrations and congratulations lies the sober recognition that our current global pledges for emission reductions still see the world on track to overshoot the so-called ‘2degree guard rail’ into catastrophic climate change.

Pulling out all stops to encourage speedy ratification of this new Agreement, communities need to maintain pressure on governments to aim higher on climate. Ambitious midterm targets, dedicated funding and commitment to both mitigation and adaptation challenges will help to keep global warming in check.

Climate change is only one of many wicked problems besetting our fragile global ecosystem, but its invisible ability to magnify many other existing problems makes it pivotal. The sheer diversity of research strands brought together in the plenary halls of Paris was both fascinating and slightly chilling – global security, water and food security, energy security, biodiversity, forests, desertification…

The role of energy efficiency pathways was identified at all levels, and the cross-links with the rapidly growing role of sub-national groupings such as the Climate Group States and Regions Alliance and the US Climate-Ready States and Regions Initiative. 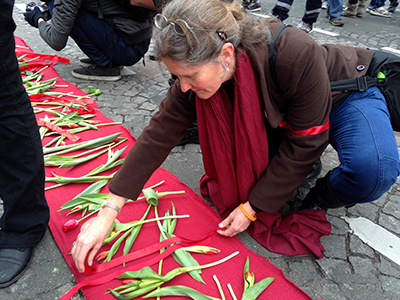 Philippa lays a ribbon at the Red Line Action

Community resilience will be a key to safely charting a course through the troubled waters ahead, as it’s clear (due to time-lags built into complex systems) we will see more extreme events before there is evidence of positive change.

On the last day, I was moved to see over 10,000 ordinary citizens, families with children, workers, artists and students showing the strength of public support at the Red Lines action on the Champs Elysees. People carrying red flowers and umbrellas unfurled two huge 100m red banners to create a 1km red line for a just and liveable planet that stretched from Place de l’Étoile to Porte Maillot. It was a peaceful and creative way to honour the victims of climate change and pledge to protect the climate.

Collective action by people of faith and good-will expressing concern about the future of the planet may be one of our best investments in a safer climate for future generations. I urge us all to keep throwing our voices and support behind the global willpower to choose life. Join Catholic Earthcare Australia, The Global Catholic Climate Movement, OurVoices and interested members of your own local community to keep the hope alive.