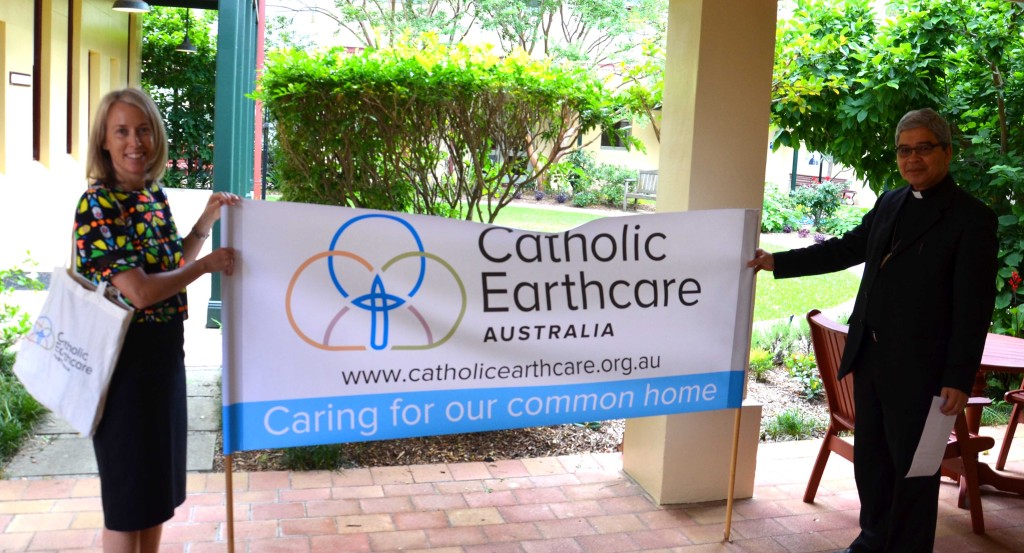 Jacqui Rémond,  National Director of Catholic Earthcare Australia, presents the Apostolic Nuncio for Australia with a banner that will be used in the People’s Climate March.

The Catholic community in Australia is mobilising ahead of the Paris Climate Summit to call for a strong global agreement from world leaders.

This weekend, over a million people around the world will take to the streets for a Global Climate March. Cardinal Oscar Rodriguez will address the Climate March in Melbourne on Friday, and Catholics will march in capital cities and towns across Australia calling for an end to fossil fuels and a planned transition to 100% renewable energy.

The Climate March has been endorsed at the highest level of the Catholic Church. In a recent letter addressed to every Catholic Bishop on Earth, Cardinal Turkson, president of the Pontifical Council for Justice and Peace, asked the bishops to support the Climate March and offer the Eucharist on November 29 “for a responsive and successful international conference and summit”.

Led by the Global Catholic Climate Movement, over 700,000 Catholics have also signed a Catholic Climate Petition, which will be presented to world leaders ahead of the climate talks. This petition asks governments to drastically cut carbon emissions to keep the global temperature rise below the dangerous 1.5°C threshold, and to aid the world’s poorest in coping with climate change impacts.

Jacqui Rémond, as the head of the ecological agency of the Australian Catholic Bishops’ Conference, would like to invite all people in Australia to join the Catholic community this weekend for united climate action. She said, “I encourage you all to join the People’s Climate March, to sign Catholic Climate Petition and pray for a strong global agreement at climate talks in Paris. Together we must take the necessary steps to care for Mother Earth, our common home”.

To sign the Petition or join the Climate March visit: https://catholicearthcare.org.au/environmental-advocacy/climate-change/.

Catholic Earthcare Australia is the ecological agency of the Australian Catholic Bishops’ Conference. Since 2002, Catholic Earthcare Australia has worked to stimulate and sustain an ecological conversion with all people of good will, through a range of initiatives that focus on environmental education, research, building national networks, transformation and advocacy. For more information see https://catholicearthcare.org.au/.

Founded in January 2015, the Global Catholic Climate Movement is a coalition of over 230 Catholic organisations working to respond to the moral imperative of the climate change crisis. Further information can be found at http://catholicclimatemovement.global/.