In the wake of Pope Francis’ groundbreaking encyclical on the environment, Laudato Si’, released in mid-June, three Catholic agencies are among the first to respond to its urgent call to action. 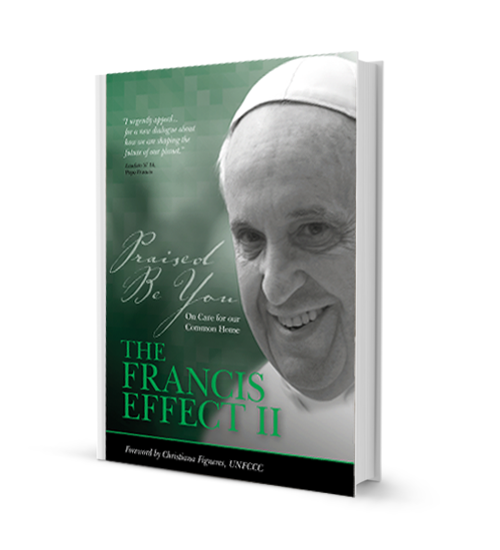 In coming weeks, Catholic Earthcare Australia, Catholic Religious Australia and Catholic Mission will together release the second book in The Francis Effect series. Entitled The Francis Effect II: Praised Be You – on Care for Our Common Home, the book will analyse the encyclical’s key themes on ecology and creation, with insights from Catholic theological and ecological experts.

The Francis Effect II: Praised Be You will be among the first comprehensive responses to Laudato Si’ when it is released in July. Twelve prominent Catholic leaders, including Catholic Earthcare Director Ms Jacqui Rémond, ecological theologian Father Denis Edwards and Chair of the National Aboriginal and Torres Strait Islander Catholic Council Ms Thelma Parker, will join to offer their perspectives on Pope Francis’ encyclical.

The book will also inspire nationwide colloquiums that will provide Catholic leaders in mission, and all Australians, with a unique opportunity to collectively engage with the encyclical. The colloquiums will be hosted in Sydney, Melbourne, Brisbane and other cities around Australia, and will feature keynote speakers who were also contributors to The Francis Effect II: Praised Be You.

Catholic Mission Deputy National Director Peter Gates affirms the joint effort is driven by a desire to enable Catholic leaders at all levels to respond in an authentic and dynamic way to what Pope Francis describes as an “urgent appeal … for a new dialogue about how we are shaping the future of our planet.” (LS 14)

“The colloquiums held for The Francis Effect: Living the Joy of the Gospel in 2014 were a great success in updating and inspiring Church leaders on the latest teachings of Pope Francis, and I’m sure The Francis Effect II: Praised Be You colloquiums will be just as powerful,” says Mr Gates.

As the international mission agency of the Catholic Church in Australia, Catholic Mission funds projects in areas deeply impacted by climate change, including Kiribati, the Carteret Islands and much of the Amazon basin. Catholic Mission works in these areas, among many, to align with Pope Francis’ call to us all to be missionary disciples and “cooperate as instruments of God for the care of creation, each according to his or her own culture, experience, involvement and talents.” (LS14)

Catholic Earthcare is the ecological agency for the Catholic Church in Australia. The agency’s purpose is to enable a loving and sustainable relationship with the natural world through environmental education, research, networks, advocacy and transformation. To answer the call of Laudato Si’, Catholic Earthcare is is urging Australians to act through simple, self-driven initiatives such as signing the Catholic Climate Petition, participating in ‘Meatless Friday’, joining the National Energy Efficiency Network and starting a garden at home, work or school.

To learn more about The Francis Effect II: Praised Be You, or to pre-order the book, please visit shop.cm.org.au or phone toll free on 1800 257 296.