This article was written by Catholic Earthcare staff member and youth engagement officer Tess Corkish.  She explores why she thinks Jesus would be an environmental activist and how her activism is the embodiment of her faith. It was first published in The Good Oil, the e-magazine of the Good Samaritan Sister. 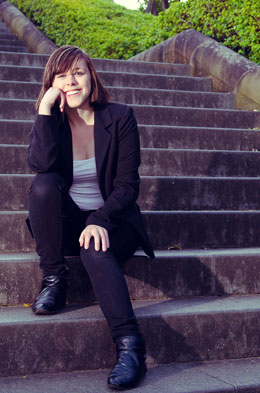 I decided to become a vegetarian in a rickety old ute, on a bumpy road on a small island of Vanuatu called Tanna. (You may recognise the island of Tanna as one of the worst hit by Cyclone Pam.) As I sat next to my mother in the back of the cabin, I watched silently as we passed thatched houses and corrugated iron sheds, as we stopped to pick up locals heading in our direction, and as we stopped at what operated as a petrol station (a hut the size of an outdoor toilet with a price sign hanging on the front). As we travelled, I couldn’t help but feel terrified for these people, so vulnerable to the effects of climate change. While I am lucky and can choose what food I eat, whether that is emissions intensive meat or tofu, these people are at the mercy of wind and rain.

Climate change is an issue of justice. It is undeniable that those who are already disadvantaged by poverty or food scarcity will be the first and worst hit by climate change. Women make up the majority of the world’s poor and are more dependent for their livelihood on natural resources that are threatened by climate change, so it is an issue of gender inequality, too. It’s also an issue of generational inequality. We are giving our children and their children a planet plagued by natural disasters and mass extinction.

For me, my relationship with the environment and the call that I feel to fight for its protection is less a desire and more of a vocation. This is no more evident than in my choice of confirmation saint. I was eleven and I do admit that the fluffy animals were the biggest draw, but I found a pull in the story of St Francis of Assisi that I hadn’t felt while reading about any other saint, so much so, that I decided to go against the tide and choose a male saint for my confirmation name. It wasn’t until last September when I started my position at Catholic Earthcare, that I discovered St Francis of Assisi is the patron saint of the environment.

I cannot help but see the guiding hand of God in my choice of confirmation name. I cannot help but feel that I have always been called to fight for those who have done the least but will be most affected by climate change. When I see islands destroyed by wind and floods, it reinforces that I am fighting the right fight; that I am taking the path Jesus would have taken. Jesus was a disruptor, someone who stood defiant in the face of injustice and used his gentleness as a weapon against those who sought to oppress others. He also understood that while we must not hurt others, sometimes we must risk our well-being to save the lives of others.

I feel that every time I speak with someone about climate change, or seek to change their mind, it’s like I feel the power of the Holy Spirit. Jesus is there when we are fighting for our lives and the lives of others. He was with thePacific Island Warriors when they sat in canoes for a whole day and blocked coal ships in Newcastle, and he is with those who lock themselves to mine equipment like representatives from Australian Religious Response to Climate Change. He is there amongst those sitting in university hallways demanding climate leadership.

Jesus never stopped being anything but a voice for the voiceless. To tackle climate change we need to have a different relationship with the way we consume and the way we interact with the rest of the world. That is radical. We need to channel the radicalism of Jesus; we need to turn over tables in the temple. We need to understand that the choices we make have consequences and that sometimes those consequences don’t only affect us, but those who have no choice in the matter. The Jesus I know and love would never stand idly by and let that happen.

Mary MacKillop is famous for saying “never see a need without doing something about it”. I see a need in every single person on a low-lying island, in every single woman whose livelihood is threatened by rising sea levels and a changing climate, in every single child yet unborn. If we are to be truly pro-life as Christians, we need to count the lives of every person who will be affected by the decisions we are making today. From decisions about how we vote, to where we put our money, to where we buy our clothes, to what we choose to eat. We need to reject capitalism and consumerism and hear Jesus’ call to “sell what you possess and give to the poor, and you will have treasure in heaven; and come, follow me”.

The Intergovernmental Panel on Climate Change (IPCC) has suggested there will be as many as 150 million environmental refugees by 2050 – 150 million people taken from their homes and forced to cast themselves on the mercy of countries like Australia, which will lock them up on an island and refuse to offer them shelter. This doesn’t include those who will meet their deaths as a result of extreme weather events, water shortages, food shortages, war or domestic violence, all of which will be exacerbated by climate change.

Not very long ago, our prime minister said “coal is good for humanity” while opening a new coal mine in central Queensland, touting that it will be the world’s principal energy source for years to come. Not only is it a documented fact that coal has huge health impacts, not to mention the obvious environmental ones, but if we are to accept that the world has a future that is powered by coal, we are accepting that “we’ll be four feet underwater”, as President Obama said in 2013.

We cannot let fear dictate our choices, we cannot allow it to control us. We must come to this from a space of love: love for the creator who has given us the capacity to love and this wonderful earth of ours; love for that same earth that gives us nourishment and strength; love for our neighbour – especially Pacific islanders who are fighting, not drowning; love for generations yet unborn; and love for ourselves, people who have been given the ability to make choices and choose that love over fear.

There is a movement building and it’s coming from high and low, and there is a big fight ahead. But we know that we are on the right side of history. Future generations will see us as those who stood up when we saw a crisis of these proportions and did something about it. They will know we are Christians by our love.