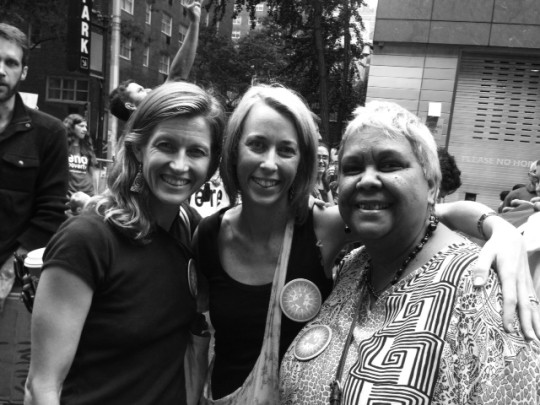 In September 2014, Catholic Earthcare Director Jacqui Rémond had the opportunity to attend the Religions for The Earth Conference and the Peoples’ Climate March in New York. She is pictured right (centre) at the Climate March with Karenna Gore and Jackie Huggins.

She found the Conference and the March profoundly moving, but also uplifting and inspirational.

Jacqui shares a few thoughts about her experience below:

The power and love of the dialogue we reached was profound and the closing ceremony culminated with a depth and breadth of commitments that are truly awesome and absolutely necessary. The audience included UN Deputy Secretary-General and Former Vice President Al Gore.

One such commitment made was from Uncle Angaangaq Angakkorsuaq, Founder, IceWisdom International/Eskimo-Kalaallit Elder, who shared with us his story of being born on the ice, 67 years ago, when the ice was 8-9metres thick. He explained that the ‘great ice melt’ is not a myth that his people had been speaking about for years because science has consistently shown that the ice has been melting and is now only about 2 metres thick. Uncle Angaangaq told us that he spoke to the United Nations in 1978 about the ice melting and that they didn’t listen.

He said that his elders had asked him to speak to the UN at this event and that his commitment, which he invited everyone to make with him, was to ‘melt the hearts of men’. He then called on his ancestors using a traditional amplifier which looked like two large skinned drums held up alongside his ears and face. The sound is like nothing I have ever heard or experienced and I could imagine Uncle Angaangaq’s call echoing across the ice sheet. It was incredibly moving and I’ll never forget his call for as long as I live. Like all the people I met at the conference, and on the People’s Climate March, their stories will continue to urge me on…”